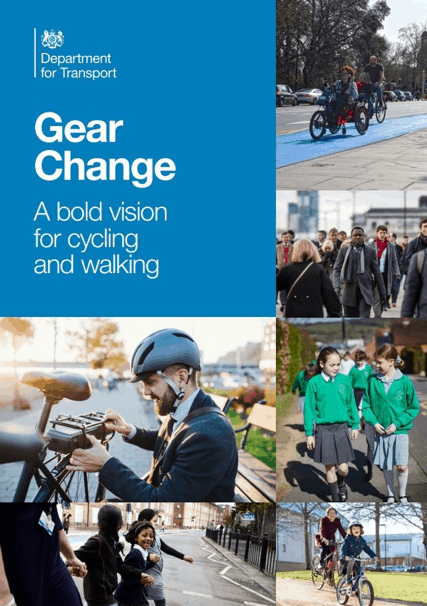 Increasing cycling and walking, it states, can help tackle some of the most challenging issues we face as a society – improving air quality, combatting climate change, improving health and wellbeing, addressing inequalities and tackling congestion on our roads.

The emphasis in Gear Change is on travel into and around cities and towns, but the document is an encouragement for greater attention to, and provision for, greener travel across the whole country.

We want – and need – the document says, to see a step-change in cycling and walking in the coming years. The challenge is huge, but the ambition is clear. We have a unique opportunity to transform the role cycling and walking can play in our transport system, and get England moving differently.

At the same time, changes to the Highway Code that support active travel are planned.  They will set down revised rules for pedestrians, cyclists, drivers and motorcylists, all within a hierarchy of road users which ensures that those road users who can do the greatest harm have the greatest responsibility to reduce the danger or threat they may pose to others.

The local authorities in the New Forest area, the District Council along with Hampshire County Council, will have some additional powers relating to transport and will be able to apply for funding for cycling and walking schemes.  While any local project may not prove to be a priority for national funding, and meeting the cost of improvements is always going to be a challenge, whatever can be done should now take into account the thinking and principles in Gear Change.

Gear Change envisages joined-up routes – isolated stretches of good provision are of little value, routes that are designed for cyclists of all abilities and disabilities, accessible to everyone from 8 to 80 and beyond.  Routes must be clearly signposted, well-surfaced and, where they are on the road, designed only by those who have experienced the road on a cycle.

All this, and much more in the document, is applicable to the New Forest, to our local towns and villages, and to the provision of networks.

In the National Park there has been a mixed emphasis on both encouraging and containing cycling.  Various infrastructure improvements around the edge of the Forest and on the main roads have been put in, but in the Perambulation – which is the two-thirds of the National Park that people come to visit – access for cyclists beyond the public highway is confined almost exclusively to a limited amount of pre-existing and disconnected heavy-duty Forest tracks.  Even the one stretch of public highway that has been marked on the official cycling map as an approved route is not signed as such to either cyclists or drivers, and it offers cyclists and other non-motorized users no special advantages over any other road.

This route could well become a Quiet Lane, a highway designation well-established to good effect in other parts of the country.  In the Forest, Quiet Lanes could provide safe links for non-motorised transport between key villages and sections of off-road paths.  They could be a good local response to the expectations in Gear Change and the increasing demand for safe transport by those who do not need or wish to travel by car.  As part of a coherent cycle network for all sorts of cyclists they would help to protect the Forest and, by reducing traffic speeds, also the livestock.

Walkers, cyclists and horse riders have enjoyed quieter roads during the Covid lockdown.  The ongoing need to tackle the climate emergency, combined with reduced public transport capacity due to social distancing and the increased use of private cars, means that active travel such as cycling and walking has an even more vital role to play.

Gear Change presents a vision for the future, not just for others somewhere else but for everyone everywhere.  Greener travel and its benefits for everyone and for the environment should be a high priority in every part of the country, including ours.