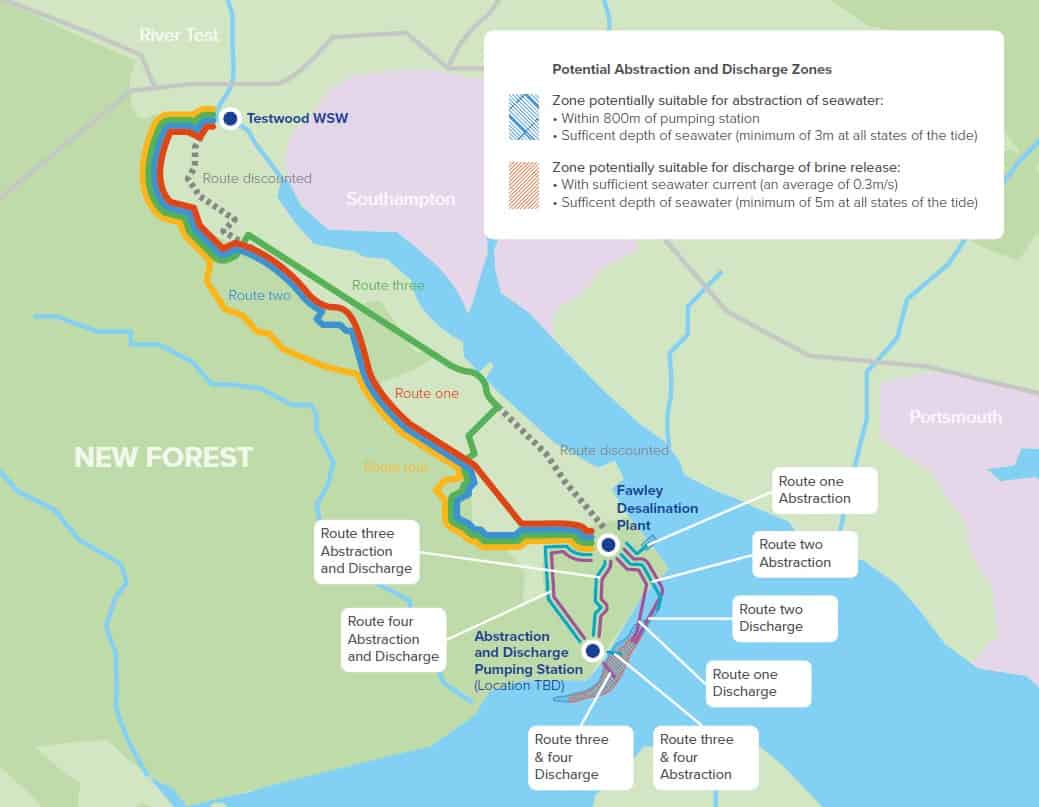 To provide sufficient water in its area Southern Water is proposing building a large-scale desalination plant with extensive supply and discharge pipes in a conservation area. What disruption will building it cause? Is the damage to the environment from its construction and subsequent operation justified? Are there better solutions?

The availability of drinking water is just one of the many threats to life from climate change. Southern Water predict that rivers in the South East may fall by as much as 35% because of population growth and climate change. There is no doubt that action needs to be taken now to avoid water shortages in the next 30 years.

Southern Water’s proposal for a desalination plant at Ashlett Creek in Fawley is one possible solution but when you weigh up all the facts, the project makes no sense. There are disproportionate values assigned to the other important environmental factors and, at first glance, it doesn’t even make financial sense to the customers of Southern Water that will pay for it.

A stretch of coastline from Hythe to Calshot is designated as Special Area of Conservation (SAC) and is part of a total 29,000 hectares in the New Forest. The Solent and Southampton Water is also a Ramsar site, an international designation for important wetlands that the UK government have committed to protecting. The construction of the plant alone may take several years bringing much disruption to these important sites. Once built, the process of desalinating water produces wastewater with much greater concentrations of salt that will be pumped back into the Solent. The likely impact to ecosystems and wildlife is in direct contradiction with designating protection to this stretch of coastline.

A new 25 km pipeline will be needed to carry water from Fawley to Testwood Lakes. This too will no doubt bring several years of road disruption as well as scarring in all local areas between. The process of desalination is also energy expensive with a carbon footprint to match, reportedly as much as 15 times greater than storage reservoirs.

Presumably with so many reasons to not build this plant in Fawley, there must be no alternatives, or there are strong economic reasons for not choosing an alternative. Well, this doesn’t seem to be the case. Several alternatives have been discussed including the Havant Thicket Reservoir Resilience Project that may cost as little as one third of the £600m cost of the Fawley Plant.

The New Forest Green party joins the local residents and campaign group ‘Fawley Desalination Plant’ in their stand against the proposal. We urge that local authorities continue to uphold their commitment to protecting international sites of importance, and that Southern Water provide a more accessible and communicated consultation with local stakeholders.