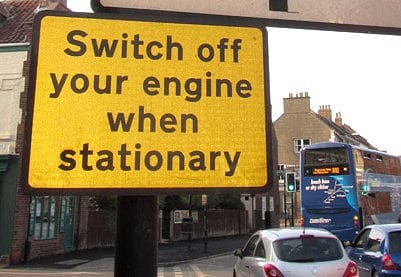 Car sharing, reducing your number of car journeys and using public transport are all effective ways of cutting emissions. Less attention has been given to switching off your engine when stationary as a small action that everyone can do when they have to or choose to use their vehicle.

More new cars are being fitted at manufacture with auto start/stop systems to help reduce pollution, and drivers without that system can take an easy step to produce some of the same benefit at appropriate times.

Catalytic converters have done a lot to remove toxic emissions and create some less-noxious gases but these, on the other hand, are largely greenhouse gases, which bring their own problems.

Even with cleaner cars there are still unpleasant gases and particulates coming out of exhausts. This makes idling of particular concern outside schools, in taxi ranks and wherever people live and work in areas of traffic congestion. And on busy streets air pollution can be worse for people in their cars than for those nearby. But aside from all the above, it is an offence to idle your engine on the public highway when stationary, and this is made clear in Rule 123 of the Highway Code. Unnecessary idling is liable to a fixed penalty fine. It is only permissible to leave the engine running if the vehicle is stationary in traffic or for diagnosing faults.

Times when you should switch off are, for example, when stopped outside a shop, when you pull in (hopefully) to use your phone, while waiting outside school, in a lay-by, at set-down and pick-up points, in taxi ranks and when loading or unloading.

Even off the public highway in petrol stations, in car parks and when parked outside your house it’s still a good idea to switch off.

Hold-ups at level crossings are sometimes argued to be the same as being stopped in traffic but why find a reason not to switch off? Local authorities often put up signs encouraging drivers stopped at railway crossings to turn off their engines. Some driver trainers and bus operators give their drivers the same instruction. It makes sense.

Apart from the UK, Belgium, Denmark, Finland, France, Germany, Holland, Italy, Sweden, Switzerland, Canada, Hong Kong, Japan, Taiwan and Singapore all have various idling time limits. Thirty-one states in the US currently have regulations about idling, and many areas there have active campaigns promoting ‘No Idling’. Other countries are preparing legislation.

The definition of excessive idling varies in different countries, from a few minutes to no tolerance at all. In the UK, various sources, including the AA, say that if you’re going to let the engine idle for more than a minute or two then it is probably worth turning it off. The RAC say engines should be turned off for waits of more than one minute. Scottish local authorities set the time at 30 seconds.

Restarting the engine is widely considered to use fuel equivalent to 10 seconds of idling. This leads to the 10 second rule; if it looks like you will be stopped for longer than 10 seconds, turn off the engine and restart when you are ready to go. That way you maximise your saving.

Cars with fuel injection and electronic ignition have been made for about the last 25-30 years and do not require use of the accelerator when starting, unlike older cars with carburettors and chokes which used a surge of fuel on starting. This is why restarting uses so little fuel.

It has been calculated that 5% to 8% of fuel consumed by vehicles occurs whilst idling. Even if you think these figures may not apply to you, remember that no amount of idling comes free.

Switch off, save money and engine wear, cut pollution and keep within the law. What’s not to like?